Could always turn my eye. Short trench coats
With a belt. London girls. Still turn my head.
But today, the green leggings, waist down
Skin tight, Orange hair. Big sunglasses
A dream that has gone forever.

Posted by Peter Bowden at 5:22 AM No comments:

Thank you dear friend of our recent tour,
For telling us who started the 100 year war with France….
I had no idea who was this Edward III
So I smart phoned him ….And unearthed a great story.

She invaded England with her lover,
Roger Mortimer. And won .
Mortimer supposedly arranging for the killing of her husband, the English king,
With a red hot poker.

She came with her son, Edward III.
She and Mortimer reigned just 4 years,
For her son rallied the barons, and took his crown
Mortimer he hung at Tyburn .

Isabella was placed under castle arrest - well financed and loosely enforced,
But the interesting story is her three brothers ,
Louis, Philip and Charles.
none of whom had children.

So the Capetian line died out.
Edward III claimed the French throne through her.
Daughter of the French king
But she was never a queen, always claimant.

Her brothers’ wives imprisoned or killed.
The guilty knights, if guilty, after torture, killed. Those who should know
agree that they were castrated, drawn and quartered or flayed alive,
Broken on a wheel, then hung.

And a hundred years of war followed –
Crecy, Agincourt and finally Joan of Arc at Chinon,
But there is much more.
The curse of Jacques de Molay,

The last of the Knights Templar, retracting a confession
Made under torture
While being burnt at the stake. A curse on Isabella’s father,
And on Clement V the pope.

On the fulfilment of this curse
Much has been written.
They were not happy times. I hope that
the world has come a long way since.

Posted by Peter Bowden at 9:17 PM No comments:

I had a dream

I had a dream

Last night.
I had to evacuate a space station
But I would not go.

Dodgie couldn't come.
The escape gear did not fit him
I stayed.

In the morning
Dodger was still there
I was happy.

But I wondered
He was a dog... had I died first.
I wondered.

Posted by Peter Bowden at 2:32 PM No comments:

A Free Ticket to the Movies

I went this past weekend
To the movies, ‘The descendants’
They say it will get an Oscar
I walked out .Twice.

An unbelievable story they told
A wife hit by a jet ski
Comatose, On life support
They have to pull the switch. No hope

Poisonous relations with his daughters
I cannot comprehend any person talking
to his children his way
Hazel  says it got better. I was long gone

The descendants were the family
Selling their land to a developer
High rises, hotel complexes, against beautiful Hawaii
Natural beauty .A common issue.

His wife was having an affair
Clooney wanted the lover
to say goodbye, Before the
switch off.  The lover could care less.

Any issue is enough for
a lifetime, But four in an hour fifty
Too much, But Hazel and her friend liked it
Making me wonder many things.

I went back in . Just as he was screaming
at his  older daughter. Out again
I wondered if this was the reason
Only women go to book clubs

and only read fiction. For this was
fiction to excess. I complained.
They had a policy. Gave me a ticket
to another movie .Next week.


Posted by Peter Bowden at 9:06 PM No comments:

I had the Green Light

Yesterday, Sunday, as I drove home from the airport.
A man walked across the intersection
at Petersham
I stopped. Pushed on the horn.  Just a little. Worried
for I had to stop in the middle of an intersection.
He laughed, raised an arm, walked on past me
About.to blast more angrily. But no.
He was of Middle Eastern appearance
Too many drive by shootings these past weeks
I drove on.
Wondering what had happened to me.
And my city

It has been a long time, Tub
Since we’ve talked together
We should have done something then, Tub,
for it is happening now over again
There was the nation’s policeman
Who said the world was not so safe
But he backed completely off
When the politicians told him what to say.
And the General of the Army
who agreed with the politicians
Yet a million of us ordinary people,
Believed it to be the other way
WMD have come and gone
This time the intelligence services
with names like DIO and ASIO,
ASIS and Pinocchio
Where nobody knows who told what to who
He has won control in the voting, Tub.
So expect it to get much worse
‘ll be easier now to take people’s jobs
and throw them on the street,
in the name of a god called Growth.
I told you before it was time in jail
For speaking out too loud
Dead still we stopped that one then Tub.
But it will come up again now soon,
And the possibility does really exist,
that I might get it too.
My family too has gone its own ways, too
We told you we were worried then,
And now it is more than two years later,
Two sadder people.
That is the world, Tub
Posted by Peter Bowden at 6:06 AM 1 comment:

Boats, magic in themselves
Pushing into the wind
Lee awash, much sail up
A joy rare to experience.
Wandering down the bay
Wings a–gulled,
Every square of sail spread out
Easy for you; a lazy time.
Wind and rain screaming
across the boat. Wet through;
Eyes squinted tight, barely seeing
A little apprehensive.
At a mooring on the bay,
Friends, pleasant times
Sun streaming, sails tied
Other boats around.
Overnight, further up the coast
A strange harbour,
Raining, the hatch leaks,
No sleep; but secure at anchor
The joy of it all,
Out to sea
Fair weather, cloudless sky
Following winds, coming home.
Posted by Peter Bowden at 6:01 AM 1 comment: 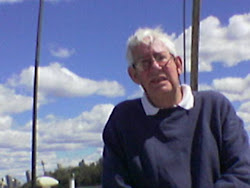